The History and Evolution of Céu do Montréal’s Uniforms

The Santo Daime tradition has two uniforms, the blue uniform for Works of Concentration, Healing and the Mass, and the white uniform for Official Works,  festival, celebratory  or memorial dancing Works which are held on specific days of the Santo Daime Calendar.

There are various sources that describe the history of the development and adaptation of the uniforms worn in the Santo Daime religion. It is considered that the introduction of the white uniform began in 1936. Numerous changes were made in the  ensuing years, as various decorative elements were added, changed or removed over time.

Mestre Irineu, born in 1890, came from the region of Maranhão and some researchers suggest that aspects of the religious and cultural traditions of the region can be found in the Santo Daime.  In particular, the customs and rituals of Saint Gonçalo contain strong resemblances in dance, uniform, music as well in the structure of the ritual buildings. It is suggested that these influences played a role in the early development of the rituals, music and uniforms of the Santo Daime.  Mestre Irineu’s Catholic upbringing is reflected in the Santo Daime, as are the Native beliefs and Spiritism experiences he had in his apprenticeship with Peruvian Ayahuasqueiros.

After leaving Maranhão at a young age, Mestre did not return until 1957. It is striking to note that after his visit, more changes were made in the White uniform adding elements including a sash, colourful ribbons and a rose, making it even more similar to traditional Saint Gonçalo uniforms. For example – the crown worn by the women in the rituals of the Santo Daime are very similar to the ones of Saint Gonçalo. Later, some of the additions or costume elements were removed – but only from the men’s uniforms. In time the rose was changed for the six-pointed Star similar to the one worn today.

In 1997, after one year of apprenticeship in the Santo Daime, I felt called to take my Star, and make the full commitment to the Santo Daime path. This calling was confirmed one evening in a Work as the Star came to me in a vision, divided into two Stars, and one Star took up residence in the middle of my forehead and the other over my heart. As the miração continued  I could see myself, as if from another vantage point. While in actuality I was wearing simple, all white clothing, I could see myself wearing a white pleated skirt, a white long-sleeved blouse and a green sash around my waist, with the Star pinned over my heart. I kept this vision in my heart, wondering why I had been given it, as the woman’s uniform that I was about to put on was much more decorated and complicated.

From its official founding in 1997 until 2010, Céu do Montréal wore the traditional white and blue uniforms in all rituals. In 2010, upon choosing independent status, and while redefining its Mission Statement and reviewing policies, Céu do Montréal members took into consideration the uniforms of the rituals. After considerable prayer and discussion the following decisions were made. The blue uniform would remain the same for both women and men, with the exception that the crest on the pocket of the woman’s blouse could be replaced by the Star, thus bringing the women’s uniform into alignment with the men’s.

The men’s white uniform remains the same, however without the green stripe on the side of the men’s trousers.

The women’s white uniform has undergone the most change. It was taken into consideration that many of the elements that had been on the men’s uniform had been removed, such as trailing coloured ribbons (known as alegrias), and green sashes. It was decided – with the unanimous consent of the members, that the  woman’s uniform be a more simple and practical one that would respect the lineage, be in alignment with the simplicity of the men’s white uniform, and also be more in harmony with Canadian culture. Twenty years later,  the vision regarding the women’s white uniform that I had the night the Star came to me, is now a reality.

The women’s white uniform of Céu do Montréal keeps the basic white uniform: the white long-sleeved blouse, the pleated white skirt, and has a green sash at the waist and a green bow-tie. All other costume elements, including the crown, have been removed.

The Star is worn in the traditional place on both the men’s and women’s blue and white uniforms.

Please see the historical and current photos below. 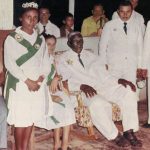 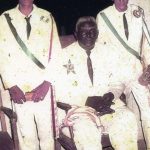 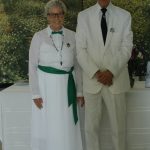