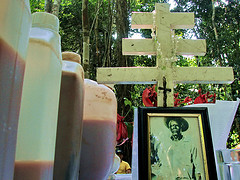 Santo Daime’s entheogenic* sacrament, known as Santo Daime or Daime, has been used for millennia in South American indigenous cultures. Historically the tea has had many names including Hoasca, Ayahuasca, Yage, and Caapi. It is one of the traditional sacred technologies of South American Shamans. In many regions it is still used traditionally as a medicine, for discerning and treating various ailments, as well as for its vision-inducing effects which are said to be profound and life-changing. The Daime can induce a strong emetic effect which is regarded as a purging of emotional, karmic, spiritual, or physical impurities.
The Santo Daime sacrament is made from two plants, the vine Jagube – Banisteriopsis Caapi and the leaves of the tree Psychotria Viridis, known to church members as the “Queen of the Forest”. The tea is prepared ceremoniously by members of the centre in a festival called a Feitio. During the Feitio hymns of the tradition are sung, and the Daime is taken while the men shred the vine with wooden hammers and the women clean and sort the leaves. Due to the specific manner in which the sacrament is prepared, and the fact that the sacrament is only taken in spiritual rituals, the tea is called Santo Daime instead of Ayahuasca.
Céu do Montréal is a single Sacrament Church.

*which reveal the Divine within

NB: We do not distribute the sacrament outside of our religious works. 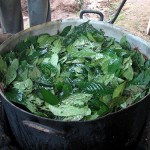 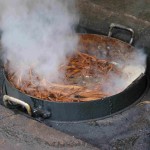